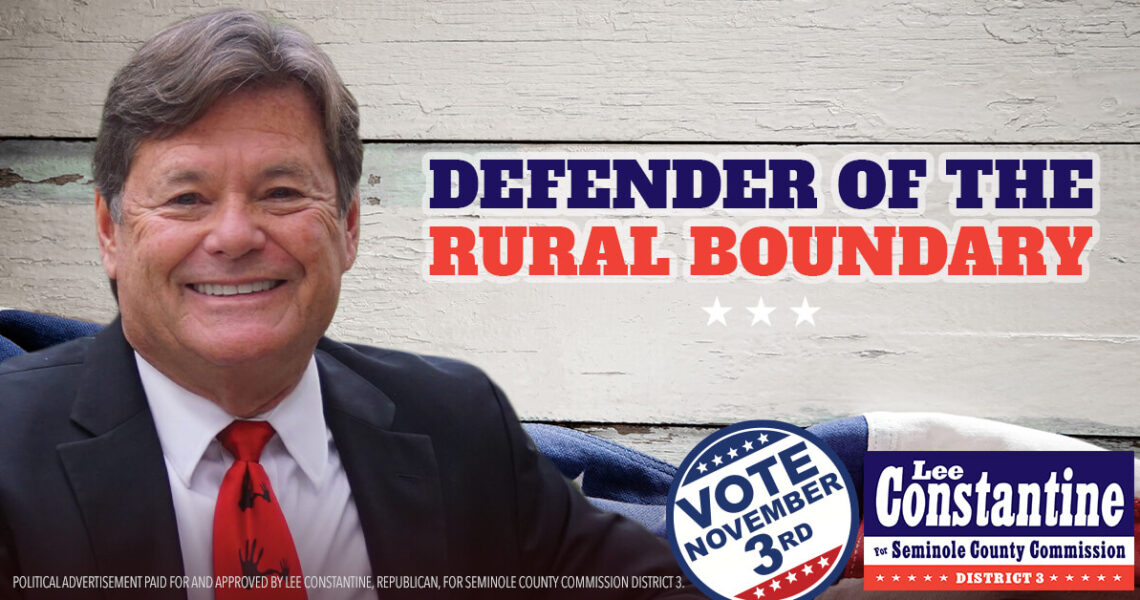 What is the Rural Boundary?

Seminole County voters approved a charter amendment in 2004 to “Establishes A Rural Area And Preempts Municipal Comprehensive Land Use Authority Within The Rural Area.”

WHAT DOES THIS MEAN?

Frequently Asked Questions are available to give you straight-forward answers to common questions about the Home Rule Charter Amendment.

By: Orlando Sentinel Editorial Board
August 13, 2020

The two incumbents in this Republican primary stood up against an attempted development incursion into the county’s rural zone. They rejected repeated attempts by the developer of a 669-acre project called River Cross to build a massive project inside the zone that Seminole voters decided long ago should be preserved in its rural state.

District 1 Commissioner Bob Dallari and District 3 Commissioner Lee Constantine came under intense political and legal pressure to cave in, but they didn’t. They honored the voters’ wishes.

Now they’re being challenged in the primary by candidates who say they would do the same.

But would they? Matt Morgan, the Longwood mayor who is running in District 1, and Ben Paris, a Longwood commissioner running in District 3, have each accepted a total of $6,000 in campaign contributions from a half-dozen companies headed by the family that owns the River Cross land.

The Orlando Sentinel also reported a tangled web of political committee money, possibly tied to development efforts, either trying to help the challengers or hurt the incumbents.

Morgan is adamant he wouldn’t have supported River Cross and would protect the rural zone. Paris has been more guarded in his assurances.

The rural zone is a defining local issue for Seminole voters in this election. Get it wrong and the county could end up with a commission that’s more friendly to paving it over. Why chance that, especially considering the contributions Morgan and Paris have been getting?

Dallari and Constantine have shown their willingness to take a punch for the voters. They’ve both earned the voters’ trust, and another term on the commission.

My Opponent’s Rural Boundary “But” Comments

In his own words, my opponent says he will defend the Rural Boundary “but”…

I PLEDGE to continue to DEFEND the Rural Boundary in Seminole County!

Thank you, Gov. DeSantis! Once again, by vetoing Senate Bill 410 you have elevated yourself above the gamesmanship of the Tallahassee insiders. With a stroke of your pen, you took those shady special interests who want to usurp the state Constitution for their own gain to the woodshed. Well done, sir. You have sent a clear message that a last minute amendment to destroy Seminole County’s pristine rural boundary will not be tolerated. Hopefully, every lobbyist and politician who feels that local government is their personal ATM heard you. Local officials and the citizens they represent have the right to control their own destiny.